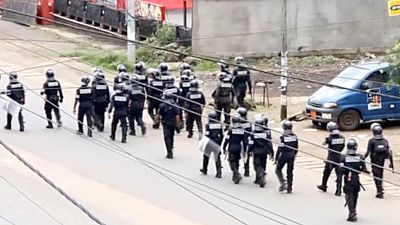 International rights group, Amnesty International, says it has independently confirmed that 17 people were killed during clashes between Cameroonian security forces and pro-independence protesters.

The clashes which took place in the country’s restive Anglophone regions on October 1 were said to have claimed eight lives on Monday morning. Another 50 protesters were wounded with over 200 arrested.

“We have been able to confirm that 15 people have died following yesterday’s demonstrations in North West and South West,” Amnesty’s West Africa regional officer said in a tweet, they subsequently revised the figure to 17.

Menawhile, Cameroon’s main opposition leader, John Fru Ndi also told the BBC that at least 30 people had died due to the protests.

Security forces used tear gas and live bullets in dispersing protesters in the regions. People in the region are seeking independence from French Cameroon despite government’s position that the country’s unity was non-negotiable.

The protests have continued into today despite a government directive restricting movement and public gathering. Bamenda, capital of the North West region is reported to be in a tense state with running battles between youths and riot police.

Situation still v tense in #Bamenda .Despite no gunshot heard since 7 am, no movement of cars/bikes allowed #Cameroon #AnglophoneCrisis