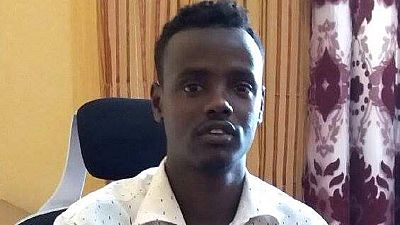 Somali journalist Abdullahi Osman Moalim died on Wednesday from injuries he sustained after an al Shabaab suicide bomb attack on a restaurant in central Somalia town of Beletwein on Sunday.

The 24-year-old broadcast journalist working with Jubbaland TV and Radio Codka Hiiraan was waiting for a press conference together with other journalists when a suicide bomber detonated his explosives, local media report.

Al Shabaab claimed responsibility for the attack that claimed four lives and left fifteen people including two other journalists injured.

Abdullahi Osman Moalim died at a hospital in the capital Mogadishu and was buried hours after.

The National Union of Somali Journalists (NUSOJ) commiserated with the family of the journalist and wished the other injured members a speedy recovery.

The United States Mission to Somalia expressed its condolences to the family of Moalim and encouraged Somali journalists “to continue their work despite the daily struggles and risks, in defense of the inalienable right of freedom of expression on behalf of the Somali people”.

Al Shabaab has been able to carry out deadly bombings despite losing most of its territory to African Union peacekeepers supporting the Somali government.

The group’s insurgency aims to drive out the peacekeepers, topple Somalia’s western-backed government and impose its strict version of Islam on the Horn of Africa state.

Journalists have also been a target of the insurgent group.

She was the second journalist to be killed in six months after Hinda Haji Mohamed who also worked for the state media was killed in a car bomb in Mogadishu in December 2015.

In August this year, a prominent Somali referee Osman Jama Dirah was gunned down by unknown assailants outside his home in Mogadishu.