Talk about jumping out of the frying pan and into the fire.

These refugees from various African countries have fled their countries’ war and have sought refuge in war-torn Syria where millions have also fled the conflict since March 2011.

Zahra Abdi is one such refugee who left her native home Somalia in 2012 and now lives in Syria’s northern Damascus city.

“If we had wanted to flee to another country close to Somalia, we would not have found a safe place.” There was only Syria. “We got here, and they didn’t ask us for a visa, nothing, we got off the plane and out of the airport,” said the 47-year-old mother of three.

Syria is also home to some tens of thousands of people from conflict-afflicted zones in the Middle East and beyond. Most of them sought safety in the country long before it was consumed by the war.

The largest refugee contingent, numbering around 31,000, are Iraqis who crossed the border into Syria to flee their country’s many years of violence.

“When we got here, the situation was good. And I married a man whose country is also at war, and whose situation is terrible. We were hoping that the United Nations would get us out of here, but all of our requests were rejected. The catastrophe is that the situation here too has become bad. Wherever we go, it gets worse. We don’t know what to do,” said Faten Nouh, a refugee from Iraq.

According to humanitarian officials some 55,000 refugees are currently in Syria. The United Nations counts about 1500 Afghan refugees, and 1500 more from Sudan, South Sudan and Somalia.

“Syria is a country where a lot of refugees are fleeing and there are a lot of internally displaced people in the country.” But this did not prevent it from accommodating more than 35 000 refugees, mostly Iraqis, from South Sudan and Somalia,” said Firas Al-Khatib, the UNHCR spokesperson.

A country like Somalia has been engulfed in violence for most of the past 25 years, and waves of Somalis have fled abroad searching for safety.

Despite what they are currently faced with, most of them say they feel safer here compared to what they left behind.

In order to forget their war experiences back home as well as the crisis in Syria, these African refugees have turned to worship as a means of consolation. 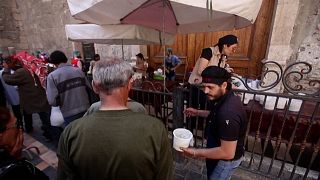