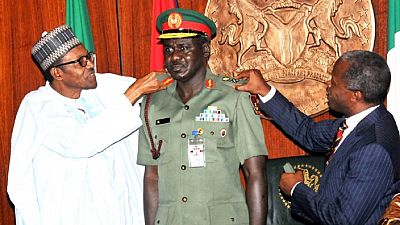 Acting Nigerian President Yemi Osinbajo has ordered Nigerian security chiefs to relocate to the northeastern Nigerian city of Maiduguri after a meeting on Thursday following a Boko Haram attack in the city.

At least 30 people including civilians and members of the military died after an attempted rescue of an oil exploration team kidnapped by suspected Boko Haram militants in Maiduguri on Wednesday.

Osinbajo told the top military command that their presence is needed in the city which has a military control center to fight the insurgency, defense minister Mansur Dan-Ali told the media after the meeting.

“We agreed that they should move back to the command centre again and see what are the things happening there. We have also agreed that we should get more surveillance devices, cameras that will be able to see distant attackers coming to the position of our troops,” he said.

We agreed that they should move back to the command centre again and see what are the things happening there.

He also expressed hope that the militants will soon be stopped as the cause of the increased attacks is due to the rainy season.

“The period of the raining season is a difficult moment for us. We cannot dominate the environment like what we do during the dry season but efforts are geared towards regaining our areas. All these ambushes that are happening would be stopped,” he added.

Northeastern Nigeria has been the focus area for Boko Haram attacks over the past eight years.