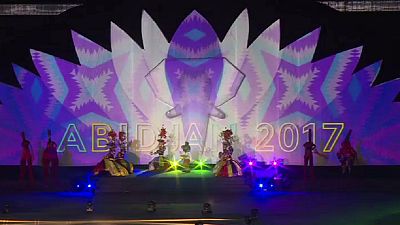 The 8th Francophone Games kicked off on Friday in Ivory Coast capital Abidjan. The kick-off of the sporting and cultural gathering took place at a stage in Abidjan in the presence of more than 10,000 people.

3600 athletes and artists between 18 and 35 years representing 43 countries will compete in sports events and other cultural competition.

The Ivorian president, Alassane Ouattara welcomed participants at the opening ceremony, the strength of the community.

We must all be aware of the strengths that this 56 countries whose common language, French, has become the hyphen between 275 million people of different races and cultures.

“We must all be aware of the strengths that this 56 countries whose common language, French, has become the hyphen between 275 million people of different races and cultures,” he said.

Few hours before the Games kicked off, Cote d’Ivoire Vice-President Daniel Kablan Duncan visited different hosting sites across the city accompanied by officials of the Games and representative athletes.

“The Francophone Games gained an unquestionable reputation starting from the first edition in Rabat and Casablanca in 1984 until the recent editions of Nice in 2013, Beirut in 2009, and Niamey in 2005. It is indeed about making these Games an element to strengthen social cohesion by associating the youth to the organization of this important event namely through direct and indirect job creation but also voluntary service,” said Vice-President Duncan in a speech.

The symbol of unity, the presence of some of his peers to the gathering.
.
For the show, the organizers have put the small celebrations in place. Dances and other fireworks to lightened the Ivorian economic capital, it is a time of feast.

This year marks Cote d’Ivoire’s first foray as hosts amid some misgivings about security preparedness. The Games is set to run from July 21 to 30.