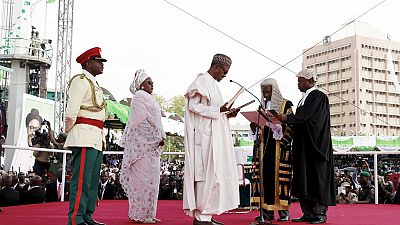 Wife of the Nigerian President, Aisha Muhammadu Buhari, says her husband will be back in the country to take charge of affairs.

The 46-year-old beautician took to Facebook to sound a word of caution to unnamed persons who has supposedly hijacked the governance process in the absence of her ailing husband. She is currently on a visit to check on Buhari.

‘‘God has answered the prayers of the weaker Animals, The Hyena’s and the Jackals will soon be sent out of the kingdom.

She shared a post of a sitting Senator, Shehu Sani, who had written a June 6 post about how the Lion King (reference to Buhari) was absent and how hyenas and jackals were scheming behind him to serve their personal interests.

‘‘Prayer for the absent Lion King has waned;Until he’s back then they will fall over each other to be on the front row of the palace temple. Now the hyenas and the jackals are scheming and talking to each other in whispers;still doubting whether the Lion King will be back or not.

‘‘Now the Lion king is asleep and no other dare to confirm if he will wake up or not.Its the wish of the Hyenas that the Lion King never wakes or come back so that they can be kings.

‘‘Its the Prayers of the weaker animals that the Lion King comes back to save the Kingdom from the Hyenas,the wolves and other predators,’‘ his post read.

The 74-year-old president, whose ailment has not been disclosed, travelled to Britain on May 7 and has not been seen in public since, stirring speculation about his condition.

Buhari took office in May 2015 after an election in which he vowed to crack down on corruption and mismanagement of public funds that have seen a rich elite benefit from the OPEC member’s oil wealth while most Nigerians live on less than $2 a day.

Buhari was last seen when he left Abuja in May whiled his voice was heard when he delivered an audio message to mark the Islamic Eid al-Fitr holiday. It was his first public statement since May 7. He put his deputy, Yemi Osinbajo, in temporary charge of Nigeria when he left for Britain.