Hundreds protest in Ouagadougou over mob assault on musician 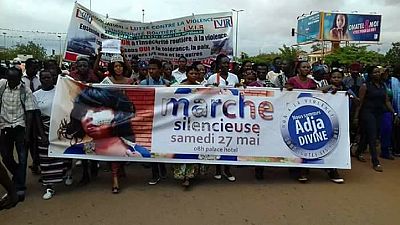 Several hundred people have taken to the streets in Ouagadougou, Burkinafaso to protest against the mob assault of a musician Adja Divine

Adja Divine was nearly lynched after being wrongly accused of stealing a baby.

Activist and blogger Raissa Compaoré said the protest was to ask all Burkinabè to avoid taking justice into their own hands. “It is normal to be indignant but it is not normal to beat a person even to death, it is not normal. We say no to all forms of violence.” she adds.

Adja Divine the artiste, denies stealing any baby but instead says she had gone out with her car to buy milk for her child.

The problem according to her was, her car papers were expired, and she had refused stopping at some police check points. She said her baby was crying and she wanted to go home.

Rumour soon spread, police chased and she was caught. A crowd soon built up and the two policemen present were overpowered.

President of the Association for Fighting Violence and Road Insecurity, Rasmane Nikiema, condemned the treatment meted on Adja. “We the leaders of civil society have come out to demonstrate against this. What has happened can happen to everybody, it can happen to my wife, my sister, my child. We need to put a stop to jungle justice based on false rumours” Nikiema says.

Adja was only saved from the mob by the intervention of some passers-by who identified her and came to her rescue.