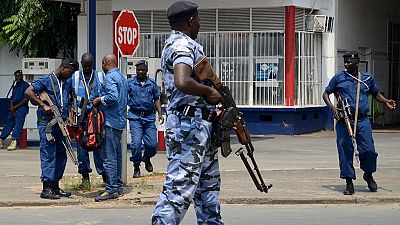 An unidentified man threw a grenade into a house in Burundi’s capital late on Wednesday, killing three people believed to be members of the ruling party’s youth wing.

At least 700 people have been killed in violent clashes between supporters and opponents of President Pierre Nkurunziza since April 2015 when he said he would run for a third term in office. He was re-elected in July 2015 in a vote largely boycotted by the opposition.

“(Wednesday’s) attack claimed the lives of three young men. Three others were injured, including a woman, her kid and a man, and they were rushed to hospital,” police spokesman Pierre Nkurikiye told reporters on Thursday.

“All the deceased persons are reportedly members of the CNDD FDD party youth wing, including a leader at the local level. Five suspects have been arrested, including a Rwandan citizen.”

A resident of the Musaga neighbourhood in Bujumbura where the attack happened and who only wished to be identified as Ancile said those killed included the son of a local leader.

Burundi was plunged into crisis when Nkurunziza said he planned to run for a third term, which the opposition said was unconstitutional and violated a peace deal that had ended the country’s civil war in 2005.

Nkurunziza was re-elected, but some of his opponents took up arms against him. Rights groups say an estimated 400,000 people have sought refuge from the violence in neighbouring countries.

Government officials and members of the opposition have been among those killed in tit-for-tat violence by rival sides.

The U.N. High Commissioner for Human Rights last month expressed hi concern about the activities of the youth wing of the ruling CNDD-FDD party, known as Imbonerakure, including night raids on opposition homes, and has asked authorities to end their impunity.