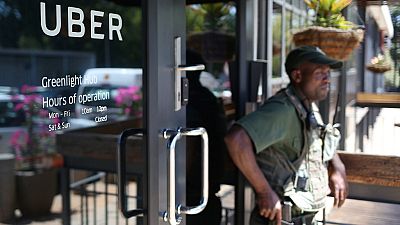 Taxi drivers in South Africa on Friday b locked roads to Johannesburg’s airport, holding up thousands of travellers in a protest against transport app Uber.

The Taxi drivers said Uber’s threat and intimidation against their “driver partners” who are using their services to boost their income is unacceptable.

A spokesman for the metered taxi business in Gauteng province, Reuben Mzayiya said Uber is illegal.
“If you want to operate, you must register with the department of transport and fulfil all the requirements. Uber doesn’t do all those things,” he added.

“We are currently negotiating with our airline partners to see how we can accommodate them,” Shinners said.“We cannot as yet make any guarantees in terms of those arrangements,” she said.