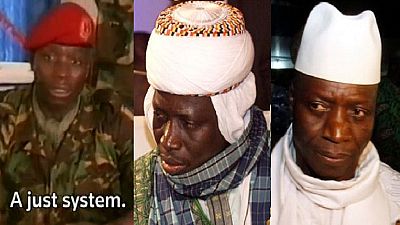 <h3>The man internationally recognized as the former Gambian president, Yahya Jammeh, ruled the country for over two decades</h3> <p>He came in as a 29-year-old Lieutenant and exits as a 51-year-old democrat who was known more for his autocratic ways and widely believed to be a person who abused rights of the media and of opponents.</p> <p><strong>Here are ten top intriguing facts about Yahya Jammeh</strong></p> <p>1. He was born on May 25, 1965 in his village Kanilai</p> <p>2. Then as a 29-year-old Lieutenant, Jammeh deposed President Dawda Kariaba Jawara on July 22, 1994.</p> <p>3. He said the soldiers that overthrew Jawara were not in for long and that they wanted a just system.</p> <p>4. Jammeh, the second president since independence in 1965, once vowed to rule for a billion years.</p> <p>5. The first president took office in 1970 till Jammeh overthrew his government.</p> <p>6. There was a failed coup in December 2014 when Jammeh was out of the country. He continues to accuse foreign powers of being behind attempts to remove him illegally.</p> <p>7. Since coming to power, Jammeh was elected in 1996 and reelected continuously in 2001, 2006 and 2011.</p> <p>8. Jammeh is known for his charm and generosity but his human rights record is poor with arrests of opponents and journalists and torturing detainees as part of the blot.</p> <p>9. He is on record to have claimed he can cure <span class="caps">HIV</span>, he also led a campaign against witchcraft in the country. He banned female genital mutilation in 2015 and again banned child marriage last year.</p> <p>10. His last presidential act was the declaration of a state of emergency on January 19, two days to the end of his tenure.</p> <h3>Other facts worthy of note </h3> <ul> <li>He is a deeply religious person who bears the titles of ‘Alhaji’ – someone who has undertaken the pilgrimage to the Holy City of Mecca in Saudi Arabia. He also has as part of his titles, ‘Sheikh’ – a learned Islamic scholar.</li> <li>He is always seen with the tasbih – the Islamic rosary and a copy of the Quran plus a wooden staff. Need i add that he always wears a cap, on his usually elaborate white outfit?</li> <li>Jammeh labeled the country an Islamic Republic in December 2015 as part of efforts to distance Gambia from its colonial past.</li> <li>He also led The Gambia out of the Commonwealth and had officially applied to dump the International Criminal Court (<span class="caps">ICC</span>).</li> </ul>