The popular and famous Africans we lost in 2016 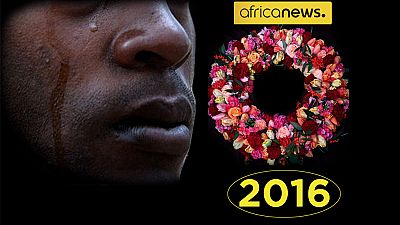 2016 has been a year of greatness and losses for Africa. As an African journal, it is our duty to reminisce over the lives lived by well-known and well-liked Africans who passed away in the year.

The year 2016 started with the loss of a royal, 101-year-old King Olubadan of Ibadan in Nigeria.

The late Oba Samuel Odulana Odugade I ascended the throne in 2007 at the age of 93 making him the oldest person to have been crowned Olubadan in recent history.

The King’s death was follow by the passing of Guinea’s former prime minister Jean-Marie Doré who died in Conakry.

Guinea was once again struck by the death of journalist, El Hadj Mohamed Diallo, who was shot and killed during clashes between rival factions of the West African nation’s main opposition party.

Africa also lost the widow of Senegalese scholar and Egyptologist Cheikh Anta Diop, Louise Marie Diop, who died in Paris at the age of 90 following a long illness.

After the disappearance of the Egyptologist, Louise Marie Diop Maes never wanted to remarry, something she considered an act of treason against her husband.

Not too far from Senegal, Sudan’s opposition leader and founder of Popular Congress Party (PCP), Hassan Al-Turabi died at the age of 84 in Khartoum after suffering a heart attack.

Turabi is one of the country’s most notable opposition figures who challenged long-serving President Omar al-Bashir and his ruling National Congress Party, a group Turabi was previously aligned with.

Nigeria mourned its Minster of State for Labour and Employment, Chief James Ocholi who died in a motor accident along the Abuja-Kaduna highway. The accident also claimed the life of his wife, son and an aide.

This followed the death of former Rwandan minister, Jacques Bihozagara , who was jailed in Burundi for spying. His death comes nearly four months after he was arrested.

Mali also sent home honourably, the award-winning photographer Malick Sidibe who is known for his black and white studio portraits that captured the lives of young Malians especially in the 1960s and 1970s. Sidibe is considered a national treasure for his unique studio portraits and candid black-and-white depictions of his homeland.

Francophone Africa and the continent as a whole woke up in the morning of April 24, 2016 to the death of African music legend Papa Wemba. The 66-year-old Congolese soukous (rumba) musician died after he collapsed on stage during a performance at a music festival in Abidjan, Ivory Coast.

Papa Wemba was once a leader of the stylish and elegant Sapeur society. He has several albums and songs to his name including popular La Vie est Belle (Life is Beautiful), Show Me the Way and Maria Valencia.

Kenya’s former first lady Lucy Kibaki also passed away this year while receiving treatment at a hospital in London.

The 75-year-old Lucy was known for being vocal and often expressing her dissatisfaction both on private and public issues.

Former Burundi president, Rtd Colonel Jean Baptist Bagaza died in Belgium at the age of 70. Bagaza came to power in a coup in 1976 and ruled until he was deposed in 1987.

The literary world lost renowned Nigerian novelist and poet Elechi Amadi who died at the age of 82. His most famous book is The Concubine which also happens to be his first published novel in 1966.

Amadi belonged to the circle of renowned African writers, such as the late Chinua Achebe, Wole Soyinka among others. The Concubine is widely used as a literature study book in African schools.

Another illustrious Naija son has fallen. May the soul of Elechi Amadi rest in peace. pic.twitter.com/GaxAVFEkqY

Egyptian Nobel laureate, Ahmed Zewail died in the United States aged 70. He was awarded the Nobel prize in Chemistry in 1999.

Zewail who served as a science and technology adviser to US president Barack Obama, was accorded a military funeral since he was a recipient of Egypt’s highest honour, the Grand Collar of the Nile.

Mandoza performed his last show on September 10 at the Orlando Stadium in Johannesburg organised to honour local music content.

R.I.P poi(Mandoza) I saw u for the last time at Orlando stadium pic.twitter.com/AzoYKnQUtp

The Democratic Republic of Congo lost its popular gospel artist, 41-year-old Misamu Marie who died after a heart attack.

Congolese state television journalist Marcel Lubala was shot dead at his home in the central province of the Democratic Republic of Congo. He is the sixteenth journalist killed in the DRC in ten years.

Popular Algerian philosopher and anthropologist Malek Chebel died in Paris at the age of 63. He has authored specialised books on the Arab world and worked to develop a liberal image on Islam especially on topics like Arabic sexuality.

Senegalese sculptor Ousmane Sow, considered one of the giants of African art died in Dakar, aged 81. Famed for his monumental sculptors of Nubian wrestlers, he produced a series of striking bronzes of muscular African men.

In the sporting world, the Head of Protocol of the Nigerian Football Federation (NFF), Ibrahim Abubakar, was shot dead at his home in Abuja. He was celebrated by the Federation.

The Nigerian official’s death was followed by the death of former Ugandan goalkeeper Abel Dhaira who passed on after suffering from abdominal cancer in Iceland. He was 28 years old.

Cameroon was again struck by the death of football player Patrick Ekeng Ekeng who died after an on-field collapse in a Romania Liga game. The 26-year-old was on the pitch for only seven minutes after coming on in the second-half as a substitute.

Another Cameroonian footballer, Jeanine Christelle Djomnang, collapsed and died less than 48 hours after the death of Patrick Ekeng Ekeng of Dinamo Bucharesti in Romania.

The female goalie of Femina Stars Ebolowa was announced dead by a statement from the Cameroonian Football Federation (FECAFOOT).

Former coach of Nigeria’s national football team, Stephen Keshi died at the age of 54 after suffering a cardiac arrest in Benin City in the southern part of Nigeria.

Stephen is one of two African players to have won the Africa Cup of Nations as a player and a coach, in 1994 and 2013 respectively. with the Super Eagles.

He was the first African coach to successfully qualify two African countries, Togo and Nigeria, to the World Cup in Germany (2006) and Brazil (2014) respectively.

Three days after the death of Keshi, the technical director of the Nigerian Football Federation, and former coach of the Super Eagles, Shuaibu Amodu, died at the age of 58.

Amodu coached the Eagles on four occasions and qualified the country for the 2002 & 2010 World Cups. Amodu became technical director of the Eagles in April 2016.

The technical director of the #NFF, and former coach of the Super Eagles, Shuaibu Amodu, has died at the age of 58 https://t.co/uMjdKVIle5

Zulu, was taking part in the Trek4Mandela charity challenge, along with his wife and other well-known South Africans when he reportedly experienced problems breathing while on the mountain.

At the tail end of the year, Ivorian football legend Laurent Pokou died at the age of 69 in Abidjan.

Pokou is remembered as the long-time record holder for the highest number of goals scored by a single player at the African Cup of Nation tournament, a record which was broken 30 years later by Cameroonian Samuel Eto’o.

We cannot forget the unsung heroes and all the Africans who died in the battle against Boko Haram and Al Shabaab in Nigeria, Niger, Cameroon, Chad and Somalia among others.

The illustrious Africans who died in peacekeeping operations with the United Nations and African Union Missions cannot be forgotten, as well as all the people who lost their lives in accidents and natural disasters that struck Africa in 2016.