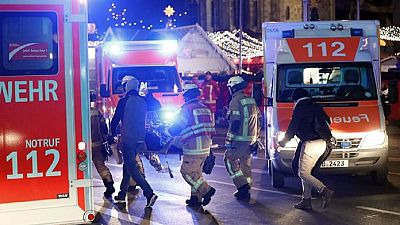 At least twelve people have been killed and about 48 others injured after a lorry ploughed through a crowd of shoppers at 40mph in a busy Christmas market in Berlin.

As German police at the scene indicated the incident is likely to be terror related, ISIS moved quickly to claim responsibility for the fatal attack.

The vehicle mounted the pavement before speeding through a crowd of shoppers, tearing through stalls as it travelled the entire length of the market on Breitscheidplatz Square, outside the Kaiser Wilhelm Memorial Church in west Berlin.

We were about eight feet from where it happened, we saw it all happen.

The driver of the truck was arrested nearby and is in police custody after initially fleeing the area, while a passenger in the vehicle died at the scene.

Police in Berlin are now using Twitter to urge locals to stay in their homes as German Chancellor Angela Merkel says she is ‘mourning the dead’.

The vehicle left a trail of devastation in its wake, in a chilling echo of the deadly terror attack in the French city of Nice in July – and comes just one hour after the Russian ambassador was shot dead in Ankara.

According to local reports, the driver of the heavy goods vehicle has not yet been apprehended and police have launched a manhunt.