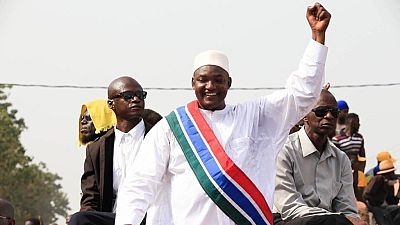 Nigerian President Muhammadu Buhari is the first African leader to publicly comment on the outcome of the just ended elections in the Gambia.

Buhari through his official twitter handle on Saturday congratulated the incoming Adama Barrow on his victory and also saluted the statemanship of Yahya Jammeh having conceded defeat.

‘‘I congratulate President-elect Adama Barrow. And the Gambian people, for peacefully exercising their democratic right to choose their leader,’‘ Buhari tweeted.

I also salute the spirit of statesmanship displayed by out-going President Yahya Jammeh, in conceding defeat.

I look forward to a smooth transition of power, and to working with the incoming President to deepen relations between Nigeria & The Gambia

Yahya Jammeh who has been in power for over two decades conceded defeat in Thursday’s presidential election to Adama Barrow. A video recording showed Jammeh speaking to Barrow and congratulating the businessman.

President Yahya Jammeh calls up winner of Gambia's election, Adama Barrow to congratulate him. He even attempts a joke. #GambiaDecides pic.twitter.com/lVONEkulPs

The country’s Electoral Commission head, Alieu Momarr Njie, officially announced final results in front of reporters at the electoral commission in Banjul. Njie is quoted by AFP as telling journalists that “It is truly exceptional that someone who has led the country so long has accepted his defeat.”

Adama Barrow, the opposition coalition candidate ends 22-year rule by Yahya Jammeh who came to power through a coup in 1994. Internet and telephone communications which were cut hours before the start of polling on Thursday have reportedly been restored.