Mourinho sent off as United draw at home, Arsenal and Man City win 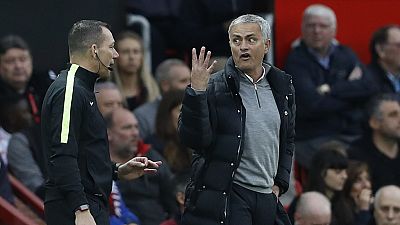 Jose Mourinho was sent off to the stands in Manchester United’s clash with Burnley in the English Premier League (PL) on Saturday. His team failed to score as the game ended in a draw.

Referee Mark Clattenburg apparently took exception to the manager’s protests and banished him from the touchline. Mourinho watched the second half from the stands even though there was no indication of his expulsion after the first half.

Mourinho was furious with Matteo Darmian not being given a penalty after an incident in Burnley’s area. The Italian full back was rather sent off. Replays suggested he dived inside the Burnley box.

PIC: Jose Mourinho is watching the second half of #MUFC v Burnley in the stands. #MUNBUR pic.twitter.com/jNDUALKKpx

United’s last PL game was a comprehensive thrashing at Chelsea. Mourinho’s return to his old club ended in a 4 – 0 score. They however beat city rivals Manchester City by a goal in the League Cup in mid week, Mourinho apologized to the fans for the Chelsea defeat during the City game.

Manchester City also won their game to remain top of the PL. Two goals each from Sergio Aguero and Ilkay Gundogan guaranteed three points for Guardiola’s side. Nigeria’s striker, Ahmed Musa was also on target as Leicester City drew one all with Tottenham Hotspurs.