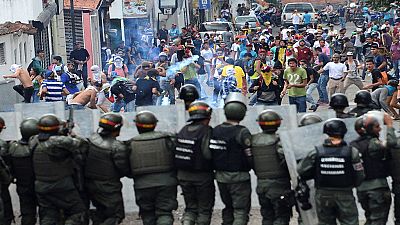 Venezuela’s opposition is increasing the pressure on President Nicolas Maduro by planning a national strike on Friday and a march on the presidential palace next week.

Thousands held protest rallies in the capital Caracas and other cities on Wednesday (Oct 26). They are enraged by last week’s suspension of their push for a referendum to remove Maduro.

They accuse Maduro of disregarding the constitution by preventing a recall referendum against Maduro, who faces low approval ratings, high crime rates and food scarcity that is leaving many Venezuelans hungry.

During Wednesday’s rallies which sometimes turned violent, the oppositions said 120 people were injured and 140 were detained. Images circulated on social media of injured people on the ground. There were reports at least three were shot.

Addressing one of the protest gatherings, opposition leader Henrique Capriles said the suspension of the referendum had been illegal.

“……I have defended and defended the electoral path because I think we have to see the country beyond Maduro. We have to think about how the country will be the day after Maduro.”

President Maduro meanwhile held a meeting of the national defence council, to address the economic and security crises of the country. Venezuela is home to the world’s largest oil reserves but falling oil prices coupled with years of price and currency controls have led to severe shortages of food and medicine.

During the meeting he criticised Capriles and vowed there will be no referendum on his rule:

“The one who calls for violence and has legal responsibilities that he may or may not have not assumed, he should face the country, he should ask for forgiveness (…) and justice and would be wise to seek peace.”

Vatican-brokered talks between the government and opposition are reportedly scheduled for Sunday on the island of Margarita. However some sectors of the opposition coalition, known as MUD, have said they would participate only if the talks are held in Caracas. 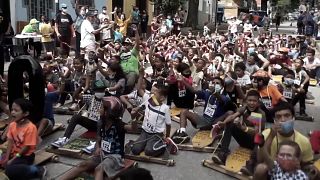