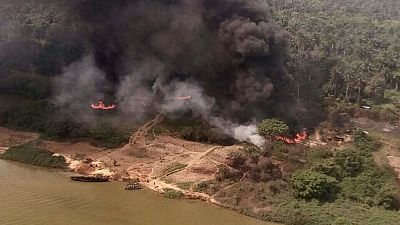 The Nigerian army has complemented ground offensives with aerial bombardment of suspected Boko Haram sites in the Sambisa forest and illegal oil refineries in the Niger Delta region.

The Nigerian Air Force announced the start of the Operation Forest Storm on Sunday which will last for some days to wipe out Boko Haram in north eastern Nigeria, local news portal Pulse Nigeria reported.

This operation comes after a proposed negotiation between the government and the Boko Haram militants to release the missing Chibok girls in exchange for jailed militants.

In the Niger Delta region where militant group Niger Delta Avengers have agreed to a ceasefire to negotiate with the Nigerian government, the air force has conducted airstrikes on Monday under the code name Operation Delta Safe.

The operation is targeted at destroying oil refineries and barges in the Delta and Rivers state along the Niger River.

The Niger Delta Avengers, which is calling for a greater share of Nigeria’s oil wealth to go to the impoverished Delta region, has warned in September against raids in the Delta region which can mar their ceasefire agreement with the government.

“We cannot be continuously fooled, the government cannot justify the indiscriminate targeting of Niger Delta youths while glorifying on these victimization of law abiding citizens of the region,” it said in a statement.

Several suspected Boko Haram and Niger Delta militants have been arrested and weapons retrieved during the ground operations over the past weeks. Casualties were also recorded on both sides, according to military accounts.