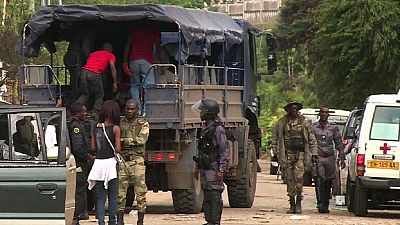 At least 70 people including several opposition figures are still under detention after a month since Gabon’s post-election violence.

A judicial source told AFP that thirty people are under trial and have been jailed till sentencing on October 4.

“Another 39 people indicted for their role in the post-election riots and looting are also under detention for investigation,” AFP quotes the source who pleaded anonymity.

Among the opposition in detention include, former MP Bertrand Zibi Abeghe, who resigned publicly before Ali Bongo late July. He was indicted for “inciting revolt” and “intent to disturb public peace” during the post-election events, among other charges.

According to his French lawyer, Eric Moutet, “he is now in solitary confinement in a dungeon and no one can see him. He may pay with his life for the courage of resigning before Ali Bongo Ondimba during a major election rally”.

The former head of intelligence, Léon-Paul Ngoulakia, a cousin of the president who joined the opposition, was granted a provisional release. He remains indicted for “inciting revolt” and “intent to disturb public peace”, the judicial source confirmed.

A teacher unionist, Jean-Rémi Yama, was arrested since July 9 during an anti-government demonstration near a large pro-Bongo gathering. He has since been held in the central prison.

Hundreds of people were arrested in early September after 48 hours of violence sparked by the announcement of the victory of the outgoing Head of State Ali Bongo on August 31.

A number of people were killed during the violence. Most of the arrested were released after several days in detention while some opposition members were arrested just before the announcement of the final election results by the Constitutional Court last week.