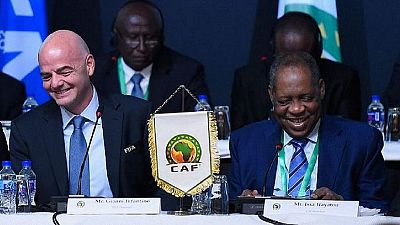 The FIFA boss was met on arrival by a CAF delegation led by President Issa Hayatou along with some Executive Committee members and officials of the Egyptian Football Association.

High on the agenda is the election of two persons onto the FIFA Council, a move that takes Africa’s representation on the Council to seven.

Local media reports that preparations for the Extraordinary General Assembly has reached fever pitch with the arrival of delegates from the various national delegates.

The Extraordinary General Assembly is the legislative and supreme organ of CAF. It will be the first time Infantino will be attending the session on African soil since taking over the leadership of the world football governing body last February.

He previously attended the 38th CAF Ordinary General Assembly held on 11 May 2016 in Mexico City, Mexico.