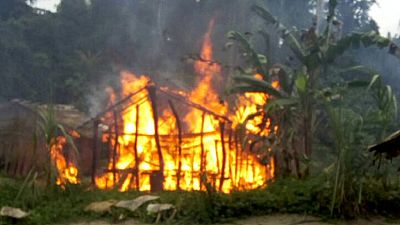 The Nigerian army says it has destroyed 74 illegal refineries and trafficking camps as part of its fight against illegal oil bunkering and kidnapping in the oil rich southern part of the country.

The army last month launched an operation code named ‘Crocodile Smile,’ as part of its efforts to rid the region of militants. Attacks by militants on oil installations has affected crude production in Bayelsa and Rivers states.

The army earlier on this week also announced that they had arrested saboteurs of the national economy. Among them, the supposed leader of the Niger Delta Avengers group which has been in the forefront of the attacks on oil installations.

The operation which was perceived as a direct onslaught on the militants however had a humanitarian touch. The army provided medical services to communities in which they carried out their operation.

On Monday, the army also confirmed that four military officers had drowned after their boat capsized during operations. The boat reportedly capsized on Monday at about 10:00 am (0900 GMT) in the Brass area of Bayelsa state, which has seen multiple attacks on oil and gas installations since the start of the year.

A witness in the Brass area said, “The boat that capsized was conveying a new batch of soldiers to the waterfront.’‘ It is not clear if the boat was attacked by militants.