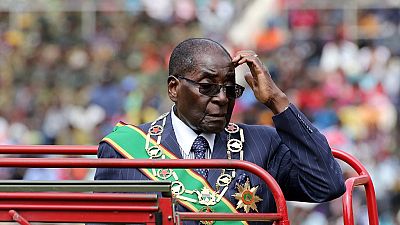 Local issues has forced President Robert Mugabe of Zimbabwe to cancel a scheduled visit to Ghana. The 92-year old leader was expected to deliver a lecture and also receive a lifetime achievement award for his role in Zimbabwe’s colonial struggle against the British.

Reason for failing to show up?

He was expected to arrive in Ghana on Thursday August 18 and depart on Monday August 22. Local media news portals in Ghana, myjoyonline and citifmonline report that Mugabe’s inability to attend the event was due to political issues in his country.

What are the issues in Zimbabwe

The Mugabe led Zanu-PF government is facing its worst economic crisis with shortage of cash and the inability of the state to pay salaries on time.

There is also the case of social media instigated protests that have hit the country. #ThisFlag protests in July caused a shutdown in the country. The government has moved to pass a cyber crime law to check elements they describe a ‘cyber terrorists’ disturbing the peace.

The impact of the El-Nino drought has also been biting the country, people face starvation in most parts of the country. Opposition pressure is also not helping matters.

What was Mugabe’s itinerary in Ghana?

He was billed to deliver a lecture at the Kempinski Hotel Gold Coast City Accra as part of the Lifetime Africa Achievement Awards Prize (LAAP) event.

The presidential lecture was under the title: ‘What Price To Pay For African Liberation: The Zimbabwean Experience.’

Ghana’s president John Mahama was expected to confer on him the Millennium Life Time Achievement award for his role in Zimbabwe’s liberation struggle from British colonial rule.

He was also expected to be part of a grand durbar in Ghana’s second city, Kumasi, on the 21st of August, that event has been postponed.

Organisers of the event, Millennium Excellence Foundation (MEF), had been preparing feverishly for the arrival of the Zimbabwean president. Huge billboards have been mounted in parts of Accra to honour his visit and there were extensive newspaper advertisement.

Mugabe’s ‘love’ and link to Ghana

Mugabe stayed in Ghana between 1955 and 1958, during which time he was a teacher at a Senior High School. This would have been his most recent visit to Ghana.

Will the event go ahead?

Despite Mugabe’s absence, the MEF have stated that the event, which is under the auspices of one of the most powerful royals in Ghana, the Asante King Otumfuor Osei Tutu II, will go ahead as planned but without the presidential lecture.

Other Africans in line to be awarded

Three illustrious Ghanaians are also expected to be given with the prize, a former governor of the central bank and finance minister; Dr Kwabena Dufuor, a business mogul Dr. Joseph Siaw Agyepong and Nana Kwame Bediako, a real estate guru.