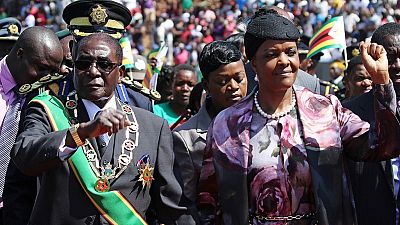 Zimbabwe president, Robert Mugabe, has asked persons seeking political power to do so through the ballot box and not through violent demonstrations.

The 92-year old leader was speaking in his annual National Heroes Day speech honouring guerrillas who died in the country’s war of independence in the 1970s.

‘‘If you want to remove the government, wait for elections, not violent demonstrations, that is what democracy dictates,’‘ Mugabe is quoted to have said.

If you want to remove the government, wait for the elections, not violent demonstrations, that is what democracy dictates.

He also tasked Zimbabweans to remain united in the face of challenges and in defence of their national sovereignty. ‘‘We should remain united, remain cognizant of the fact that without unity we cannot make much progress,’‘ the State run Herald news portal reported.

According to the president, the government was doing everything possible to ensure that salaries of public servants were paid on time. The country has been unable to pay salaries as scheduled over the last two months leading to public protests and strikes.

“Measures to avoid delays in the payment of salaries for civil servants are being developed,” Mugabe assured.

Zimbabwe is facing its worst financial crisis since it scrapped its national currency in 2009 and adopted the United States dollar.

Recent reports indicate that the country was experiencing serious shortages of the South African rand and Chinese yuan as they attempted to shift to those currencies to address the critical shortages of cash, especially the US dollar.

But the Finance and Economic Development Minister, Patrick Chinamasa, emphasized that the government would maintain a multi-currency regime and not stick to the South African rand as a sole currency.