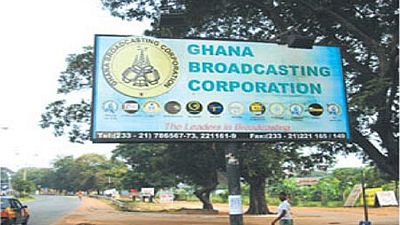 Workers of Ghana’s state broadcaster, Ghana Broadcasting Corporation (GBC) have staged a protest on Thursday in the capital Accra against a government appointed board overseeing their activities.

They accused the board of “micromanaging the corporation and misappropriating their internally generated funds to employ directors without due process”, according to reports by local media citifmonline.com.

The staff, led by their workers’ union are reported to have abandoned work and blocked the entrance of the corporation’s building to prevent any member of the board from accessing the premises.

Last week, the workers’ union sent a notice barring all members from entering the premises despite the country’s media regulator, National Media Commission’s clearance of the board from any wrongdoing after the union filed a petition against them.

The Executive Secretary of the National Media Commission (NMC), George Sarpong had told local media that the allegations were unsubstantiated and the board had on the contrary performed its duties.

“They (NMC) took time to investigate this matter thoroughly beyond the claim that the GBC union made. The commission went out of its ways and investigate further into the matter and found that those allegations were unsustainable,” he said.

The workers are calling for the dissolution of the board and threatened to strike on July 25.

The Ghana Broadcasting Corporation comprises of radio stations in all the ten regions of Ghana as well as the main television station, GTV, and satellite channels.