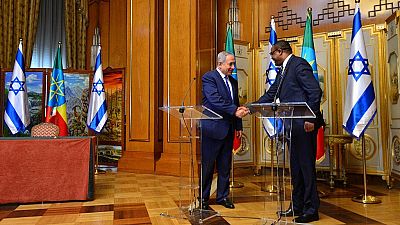 The Israeli prime minister, Benjamin Netanyahu, currently in Ethiopia on the last leg of his African tour which started on Monday in Uganda has stated that, his country is coming back to Africa and Africa is also coming back to Israel.

The Israeli PM has held talks with his Ethiopian counterpart, Hailemariam Desaegn. He however took to twitter to declare the new relationship between his country and the continent.

Mr Netanyahu also disclosed that some 9000 Ethiopians who claim to have Jewish ancestry would be reunited with their families soon.

‘‘On bringing to Israel members of the [Ethiopian Jewish] community that are still here, we are doing so, we have a commitment, we are fulfilling it on a humanitarian level of family reunification, it will not happen in the future it will happen now under the current budget – we are committed to a certain programme and we are advancing it,” he said.

In 1984, some 7,000 Ethiopian Jews were airlifted by Israel at a time the country was faced with a famine and political instability under the Mengistu Haile Mariam regime. In 1990 another major airlift saw as many as 14,000 more flown out.

Today, it is estimated that some 130,000 Ethiopian Jews are now living in Israeli since the first airlift of 1984.

Ethiopia was one of the first in Africa to set up diplomatic relations with Israel, with their ties dating back to the 1960s.

The country has on numerous occasions severed ties with Israel including during the Arab-Israeli war in 1973. They restored ties in the 1980s after Israel and Egypt signed a peace treaty.

Historically, Ethiopia – Israel ties go very far back. The Ethiopian royal family, which was overthrown in 1974, based their right to rule on a dynastic line stretching back to King Solomon and the Queen of Sheba.