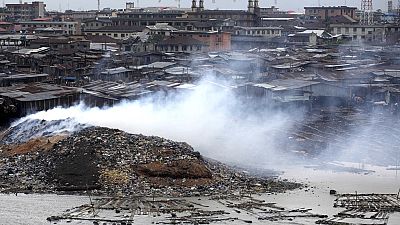 As global air pollution levels rise, Nigeria appears to be the country most affected by the phenomenon.

New data from the World Health Organization (WHO) shows four of Nigeria’s cities are among the world’s 20 worst-ranked cities for air quality.

Onitsha, a densely-populated commercial hub in the east of Nigeria had the worst air quality – judged by the annual mean concentrations of particulate matter (PM10).

... when dirty air blankets our cities, the most vulnerable urban populations – the youngest, oldest and poorest – are the most impacted.

The commercial hub recorded 30 times more than the WHO’s recommended levels of particulate matter (PM) concentration and was followed by the Pakistani city of Peshawar.

Three other Nigerian cities, Kaduna in the north, Umuahia (south) and Aba (southeast) also featured on the list of the 20 worst-ranked cities.

The top 20 list was dominated by cities in South East Asia and the Middle East with India, Iran, Pakistan and Saudi Arabia each having three cities on the list.

China, well known for its air pollution problems, however had only one city on the list – Shijiazhuang.

According to the WHO data gathered between 2008 and 2013, global urban air pollution levels rose by 8%, despite improvements in some regions.

A press release from the global health body also noted that “more than 80% of people living in urban areas that monitor air pollution are exposed to air quality levels that exceed WHO limits”.

The data however indicated that urban air pollution levels were lowest in high-income countries, with lower levels most prevalent in Europe, the Americas and the Western Pacific region.

On the contrary, urban air pollution levels were high in low and middle-income countries in the WHO’s Eastern Mediterranean and South-East Asia region where annual mean levels exceeding 5-10 times the WHO limits.

In the African region, urban air pollution data is sparse, however, available data revealed that particulate matter levels were above the media.

Assistant Director General of the WHO in charge of Family, Women and Children’s Health, Dr. Flavia Bustreo said “air pollution is a major cause of disease and death” but added that it was “good news that more cities are stepping up to monitor air quality”.

She also pointed that “when dirty air blankets our cities, the most vulnerable urban populations – the youngest, oldest and poorest – are the most impacted”.

Member states of the WHO are expected to discuss a road map for an enhanced global response to the adverse health effects of air pollution when they meet for the World Health Assembly from May 23 – 28 in Geneva, Switzerland.