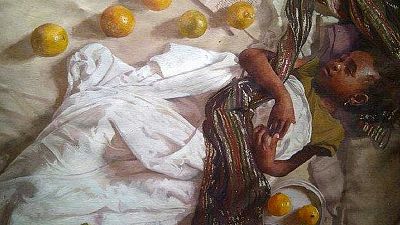 The paintings look so real, like they have a life of their own, these are works by Oresegun Olumide, a 35-year old Lagos artist who specializes in oil painting.

Olumide categorizes his work as hyperrealism. Hyper-realist artists often use photography as a reference point.

They create work that attempts to offer a new, heightened sense of reality.

His pieces celebrate life in his local community, often depicting women and children.

Olumide studied fine art at the Yaba College of Technology in Lagos and began painting professionally in 2008.

This episode of 'Heroes' focuses on Oresegun Olumide. a professional artist. He spoke on how he had the… https://t.co/6gGnkghn2j

In March, he shared his work on facebook and his pieces went vital. Since then, Images of his work have been shared over 50,000 times on various social media platforms.

Olumide’s paintings cost anywhere between 1,000 and 2,000 U.S. dollars but he also does commissioned work which is priced higher.

Among his dreams is to set up an art school in his homeland that will help him train the next generation of artists.

The artists who says his pieces capture the beauty and complexity of the African people has received invitions to exhibit his works in the UK and America.