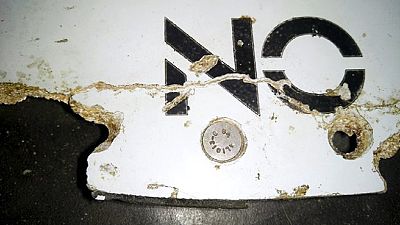 The South African Civil Aviation Authority (SACAA) has sent a piece of what appears to be a Rolls Royce engine debris from the ill-fated Malaysia airlines flight MH370 to Australia for further analysis.

The debris was found by a South African archaeologist Neels Kruger on Monday near Mossel Bay, a small town in Western Cape province.

Kruger said he came across the debris while walking with his family along the river mouth in Little Brak River. As an archaeologist, he quickly spotted the debris that did not seem to fit with the natural surroundings and he suspected that it could be from one of the engines of flight MH370.

He immediately contacted the relevant departments and believes his suspicions are true.

“I contacted the South African Civil Aviation Authority and sent them images and the location here, the location of the find. And also, then I came in contact with the Australian air traffic safety bureau, and they then advised me to please just kind of try and preserve it in more or less its original state or the state that I found it in and just keep it secure. So we bubble wrapped it and tried to just keep it safe for now,” said Kruger.

Kruger said he hopes his find will bring investigators one step closer to solving the mystery of MH370, and help comfort the families and friends of those who were on board.

Malaysian officials said Thursday that two other pieces of possible MH370 debris which had been found earlier this month in Mozambique were consistent with parts on a Malaysia Airlines Boeing 777.

Flight MH370 disappeared on March 8, 2014, en route from Kuala Lumpur to Beijing with 239 people on board, most of them Chinese nationals.

A joint search operation in the southern Indian Ocean, where the flight is presumed to have ended its journey, is yet to find its wreckage.