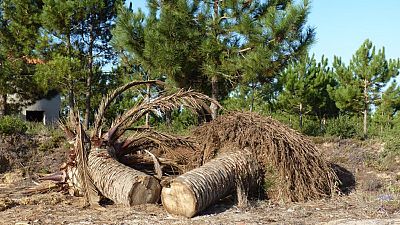 The Tunisian agricultural sector is at war with an insect that could harm its economic and environmental structure.

Being one of the world’s largest dates exporter, the country is struggling to rid itself of the the red palm weevil for the first time in three years within the country.

According to environmental experts, the insect stemmed from the importation of ornamental palm trees and now poses a huge risk to farmers in the suburbs of the capital.

We are scared, definitely. That's why we have our eyes open all the time.

“It is an insect that affects more than twenty varieties of palm trees,” said Mohamed Habib Dhouibi, the government’s chosen expert in pest control.

According to him, to control the pest, the palm has to be treated for 24 to 48 hours before disposing to prevent the insect from incubation and spreading.

The Tunisian Agricultural ministry said that the plan they approved in September last year to eradicate the insect has reached a maximum 4.2 million dinars (about €2million).

The palm and dates industry is the second largest foreign exchange earner for Tunisia after olive oil and this could be more disastrous after its tourism industry suffered a major blow from the 2015 terror attacks.