South Korea pulls out from jointly run complex with the North 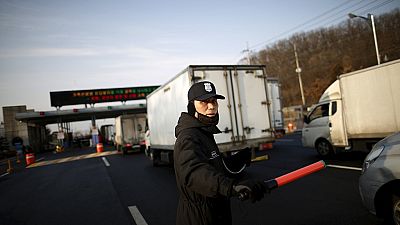 According to South Korea’s Unification minister, the industrial complex which has been jointly run by both states for over a decade was furnishing the North’s weapons programs.

Putting our people's safety as a top priority, our military is fully prepared to deal with any contingency which can happen in the Kaesong Industrial Complex.

“Putting our people’s safety as a top priority, our military is fully prepared to deal with any contingency which can happen in the Kaesong Industrial Complex,” said South Korean defence ministry spokesman, Moon Sang-gyun during a news briefing.

In response to this move, North Korea said on Thursday it will expel all South Korean workers from the industrial zone and also freeze the assets of companies in the complex.

The North further calls South’s decision to suspend activities in the area as a ‘declaration of war’.

#BREAKING: N. Korea is expelling all South Koreans in the #Kaesong Industrial Zone and closing the joint-run complex pic.twitter.com/CtgUiIZzrG

This move by South Korea is a big blow to the North as 110 million US dollars was generated in wages and fees for the country last year.

In 2013, the complex was shutdown by the North for five months during a state of heightened diplomatic tension.