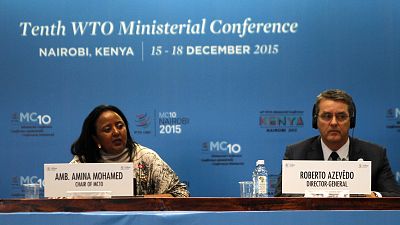 There is a strong push for the WTO to do more for least-developed countries and African nations looking for concrete changes to reduce trade costs for their agriculture and textile sectors.

Africa's farmers simply, cannot compete against heavily subsidized farmers in developed countries. In this connection, the Doha round of negotiations and agriculture provides us with the best opportunity to address the distortions and to align global trade with our development goals.

Kenya’s president, Uhuru Kenyatta in a key note address said the Ministers meeting should decide whether the World Trade Organization continues to negotiate major trade deals that have proved elusive or find a more modest mandate, like arbitrating trade rows.

Africa and least developed countries in the world expect WTO to deliver equitable growth for all nations #MC10 pic.twitter.com/glo1ggmUE0

The Geneva-based WTO, which has more than 160 members, has been trying and largely failing to agree on a worldwide package of trade reforms since a meeting in Doha in 2001 hatched an ambitious plan for knocking down trade barriers.

A goal of the Nairobi meeting is to determine how the WTO moves forward after years of talks without any major successes.

It would be recalled that the WTO launched the Doha Development Agenda in 2001 and the negotiations have lasted over 14 years. The Doha agenda seeks to remove trade barriers to help developing countries better integrate into the global economy.

Deodat Maharaj, deputy secretary-general of the Commonwealth, which represents 53 countries including India and several large economies in sub-Saharan Africa, says trade imbalances in Africa must first be addressed by internal policy changes.