The government in Ivory Coast denied on Wednesday that 49 soldiers who were arrested at Mali's international airport four days earlier posed a threat to the country.

"In Mali, those who are in power today are soliders, some of whom are special forces, Amadou Coulibaly, the Ivorian Minister of Communication, said after a weekly cabinet meeting. "They know how to overthrow a regime - it's not (done by) tourists who arrive at the airport."

On Tuesday, officials in Abidjan called on Mali to immediately release the soldiers who were arrested on Sunday at the international airport in Bamako, refuting accusations they were mercenaries.

Malian government spokesman Col. Abdoulaye Maiga said Monday that two aircraft arrived at Mali's international airport Sunday with the 49 soldiers "with their weapons and ammunition of war, as well as other military equipment."

They "were illegally on the national territory of Mali," and the transitional government considers them mercenaries, he added.

The soldiers are working for the Sahelian Aviation Services, a private company contracted by the U.N., according to the statements from both governments.

U.N. deputy spokesman Farhan Haq said the contingent was not a formal part of the U.N. peacekeeping mission in Mali.

However, he said, "they are National Support Elements who are deployed bilaterally by the Troop Contributing Countries in support of their contingents, and that's a common practice in peacekeeping missions."

Mali's government said it intends to put an end to the protection activity of the Sahelian Aviation Services by foreign forces and demand their departure from Malian territory, the government spokesman said.

Mali has faced recent tensions with the international community and the United Nations. Mali's transitional government affirmed in June that it would not authorize the U.N. mission to investigate ongoing human rights violations in Mali, including an incident at a small village in the center of Mali where the Malian army is accused by rights groups of killing more than 300 civilians in April.

France has also announced the withdrawal of its forces deployed there nearly a decade ago to help fight extremist rebels. 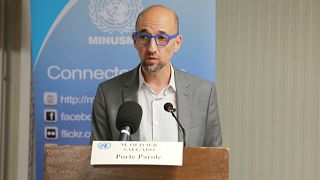