In Malawi, state prosecutors have asked the High Court in the capital, Blantyre, to give life sentences to 12 people, including a Catholic priest, in connection with the murder of MacDonald Masambuka, a man with albinism killed in 2018.

"In so far as we are concerned life sentences is what we are praying for and we are hoping that the court would see merit in our submissions", said Senior State Lawyer Pilirani Masanjala.

Five out of the 12 defendants were found guilty of killing 22 year old MacDonald Masambuka during a crime spree that resulted in more than 40 murders and 145 assaults on people with the condition.

"Yes indeed there was some bit of planning around, the evidence as it showed in court. But we are still of the view that these are not as serious to warrant the maximum sentence. For us the jurisprudence which we have read through, which we have also presented to court is that in terms of murder it should be mass murderers, serial killers, those are the ones we believe deserve the maximum sentence. For these one, as unfortunate as the case is but we are of the view that maybe a maximum sentence is not appropriate", argued Masauko Chamkakala, Director of Legal Aid Bureau.

A Catholic priest, Masambuka's brother, a policeman and an hospital employee were found guilty of involvement in selling human body parts. 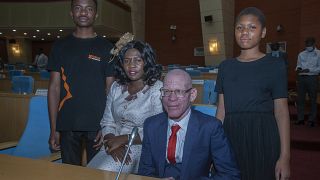