On the trails of the Central African Republic, danger often comes from all sides but recently, the presence of mines has become an additional threat hanging over humanitarian aid workers and residents.

In tank, by car or on foot nobody is completely safe in the Central African Republic. Armed groups chased out of the main cities have resorted to guerrilla strategies going as far as laying mines to slow the advance of pro-government forces. This invisible threat has maimed and killed many civilians.

Noam Assouline, an officer of the United Nations Mission in the Central African Republic(MINUSA) reports: "Since last August we have numbered 13 incidents related to the presence of these mines. 5 mines exploded and 4 of them caused the death of 8 people among whom 2 women and a child aged 5. The explosion also left 2 wounded".

Humanitarian aid workers and residents go out everyday with fear in their hearts. Augustin Ndusha who works for the NGO DRC in Paoua recalls a journey which could hae ended badly:"I heard a strange noise and was startled then I woke up. I took off my seat belt and looked around and I saw a lady next to mean bleeding and crying. After that that I did my best to get out of the car."

After several years of lower-intensity conflict rumbling along as a continuation of a civil war which erupted in 2013, recent months have seen a spike in violence. The unrest in the country of almost five million people, which the UN ranks as the world's second least developed, has left hundreds of thousands displaced and engendered a major humanitarian crisis. 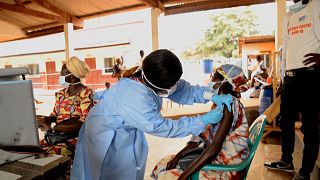