Nigeria's Delta region was once an ecological paradise, rich with unique wildlife.

But years of oil production have had a devastating impact on the area, with oil spills and gas flaring wreaking havoc on local communities and the landscape.

Nigeria is Africa's largest oil producer and although it remains the country's biggest source of revenue, the biproducts of illegal oil exploration and a powerful oil industry continue to heavily impact local inhabitants.

Oil spills have disfigured some of the local ecosystems and economies.

Parts of the Delta region's landscape have been drenched in the ink-black slick of oil waste, which has led to the disappearance of wildlife, vegetation and fish, as well as the contamination of water bodies.

Gas flares, an old and wasteful practice of burning off the natural gas associated with oil extraction, as well as the oil spills, are contributing to climate change.

Both have had a highly destructive impact on the livelihoods of local communities.

Fish farmer Christiana Eluozu, 68, is one of two million Nigerians living within 4km of a gas flare.

She has lived in her village of Idu for over 40 years, but said for the last three years she hasn't been able to catch any fish due to the gas flare nearby.

"Whenever it rains the river water becomes thick and very dark, so that when we cast our net there has been no fish these past years," Eluozo said.

An area that was once populated by wildlife including elephants, antelope, leopards and buffalos, is now sparse and barren.

"You can see the gas has damaged the roof of my house, everywhere is black - you can see - because of the dark rain" Eluozo said, looking up at the crater in her broken roof.

The Nigerian government has promised to end gas flaring by 2030.

A cleanup operation of the region's River State was launched by the government in 2019.

Despite criticism of the operation, with reports that three years on residents still do not have access to proper drinking water, Philip Shekwolo, Director of Hydrocarbon Pollution Remediation at Nigeria's Environmental Ministry, insists that the government is making headway.

Over the past decades, oil spills have triggered social unrest and militancy across the Delta region as tensions between multinational oil corporations and local communities have festered.

Shekwolo said following the cleanup initiative the communities have been more supportive and cooperative.

He said that in order to stop oil spills it is critical to stop illegal refining, which he said is responsible for most of the annual spills today that he recognizes contribute to climate change.

Shekwolo explained that illegal refineries release more greenhouse gases, as official refineries have more scientific controls, such as scrubbers that break down the hydrocarbon gas levels that are less harmful to the environment.

In May 2020, Nigeria's military dismantled illegal refining sites in the Delta region which had 174 ovens laden with about 14,434 barrels of suspected stolen crude oil.

Looking ahead to COP26 at the end of October, Shekwolo said Nigeria had the opportunity to showcase that the country is doing positive things to address climate change.

The remediation cleanup work carried out by Hydrocarbon Pollution Remediation is key part of that strategy.

According to the World Bank, satellite data estimates show that the seven largest flaring countries for each of the nine years were Russia, Iraq, Iran, the U.S., Algeria, Venezuela and Nigeria.

These seven countries produce 40% of the world's oil each year but account for roughly 65% of global gas flaring. 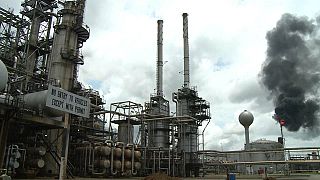