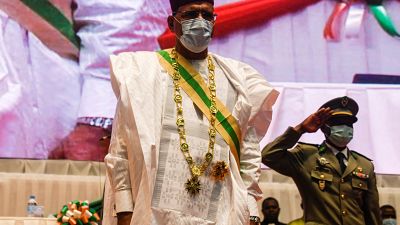 Mahamadou, 66, previously served as a minister in charge of the finance and mining . He was the chief of staff to former President Mahamadou Issoufou between 2015 and 2021.

Bazoum was sworn in on Friday in Niger’s fist democratic transition of power since independence in 1960:

Mohamed Bazoum, sworn in on Friday as president of the troubled Sahel state of Niger, worked for years as the right-hand man of his predecessor Mahamadou Issoufou.

The 61-year-old steps into the world spotlight with one of the toughest jobs around -- taking the helm of a deeply poor country battling a double jihadist insurgency.

Bazoum successfully campaigned in Niger's elections as Issoufou's anointed successor, a unifier of the nation and a defender of the rural poor.

He won the February runoff with 55.6 percent of the vote, according to official results contested by his opponent Mahamane Ousmane.

But memories of that volatile past were revived just two days before inauguration, when the government said it had thwarted an "attempted coup."

Bazoum's friendship with Issoufou is long and close.

From trade union activity, Bazoum took up a political career alongside Issoufou in the 1990s, when they formed the Nigerien Party for Democracy and Socialism (PNDS).

In 2011 Bazoum became an architect of Issoufou's first election victory, taking on the nuts-and-bolts task of managing the party while Issoufou took centre-stage.

After Issoufou was re-elected for a second and final term in 2016, Bazoum gained prominence in ministerial posts, latterly becoming interior minister before stepping down to tilt for the top job.

Born in Bilabrine in the southeastern Diffa region, Bazoum is a member of Niger's ethnic Arab minority, which some opposition figures seized on to accuse him of having "foreign" origins.

He dismissively asked campaign rallies: "Do people say Bazoum is not a Nigerien?" "You are Nigerien!" the crowd would respond.

After attending school at Goure in the southwest, Bazoum obtained his baccalaureat (high school diploma) in Zinder, the country's second city.

He left to study philosophy at the University of Dakar in Senegal, where he found his roots in the political left and eventually returned to Niger to become a schoolteacher.

He was sent to prison for his political activities under president Ibrahim Mainassara (1996-1999), but then reclaimed his seat in parliament and held cabinet posts as both junior minister and minister.

Bazoum was a major opponent to president Mamadou Tandja, who held power for more than a decade (1999-2010) during turbulent times in politics studded by military coups d'etat.

Under Issoufou, Bazoum gained the reputation of being the country's real No. 2 to the president, ahead of Prime Minister Brigi Rafini.

Bazoum reportedly handled all sensitive cases and was consulted on matters from diplomacy to the economy, and especially on questions of national security.

Despite this close association, Bazoum has said he will be his own boss.

"I will not walk in Issoufou's footsteps," he has vowed.

"He's acknowledged to wield a certain discipline in managing public affairs and to be a blunt speaker," he said.

Bazoum has taken a firm stance on the jihadist insurgency, ruling out any dialogue with the militants.

One of his pet projects is education, especially for girls, who often are forced into marriage at the age of 13 or 14 and then start having children.

On average, Nigerien women have 7.6 children, and the country's fertility rate of 3.9 percent is the highest in the world.