A top South African epidemiologist is suggesting a slow rollout of the Oxford-AstraZeneca covid-19 vaccine. Salim Abdul Karim’s call follows suspension of the vaccine in South Africa. A study by scientists in the Southern African nation showed the jabs failed to prevent mild symptoms and moderate infection from the variant, prompting a suspension of the inoculation.

"What we have proposed is a two-stepped introduction process of the rollout. The first step, we would vaccinate about 100,000 people or so to monitor what the hospitalization rates are. It will probably take us a few weeks to do that. "While we are rolling out the vaccine and collecting that information on hospitalization, we'll be able to assess whether to simply continue the rollout with the million and a half doses we have, or whether we need to stop the rollout of the AstraZeneca vaccine", Karim said.

Health minister, Zweli Mkhize said: "it's a temporary issue that we have to hold on AstraZeneca until we figure out these issues." It’s a move residents are not happy about in the face of vaccination delays.

"We thought that the government was on the ball. But it seems like they had, you know, dropped the ball once again with regards to those vaccines. So it's really disappointing’’, 28-year old unemployed Gomolemo Samore said.

The 1.5 million AstraZeneca vaccines, which will expire in April, will be kept until scientists give clear indications on their use, the health minister told reporters on Sunday. 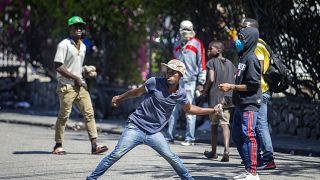