Ten years on from the countrys deadly post-election violence, the situation in the western region of Ivory Coast many fear is like a ticking time bomb.

"Peace" is fading over time here where we find a mass grave 11 people are buried in the "Carrefour" neighborhood of Duekoué, one of the major cities of western Ivory coast.

Ivory Coast is the world's largest producer of cocoa. A bulk of its cocoa production comes from its western region.

"We don't have an ethnicity problem. Ivory Coast itself does not have an ethnicity problem. It was the politicians who sent us political problems. When people come with sentences like 'it is because I am such and such (ethnicity) that they do not want me to be a candidate'. When the other one says 'yes I am Ivorian'. That's what started these problems. Here we lived in perfect harmony." - the words of Anon, a resident of Carrefour.

For Maurice Zéabahi, Guitrozon village chief, "the real problem is the land, but it's those who came to seek land here. The ones who wanted to appropriate the land. The land issue is not between the inhabitants of this village. The problem is those who have come from elsewhere in search of arable land, who want to settle and grow crops".

Indeed, the land is at the center of tensions. The "indigenous" Guerés accuse the "foreigners" of extending their plantations beyond the limits of the land they have rented or sold to them.

On the other side, the "foreign" farmers accuse the Guerés of wanting to take back the land they have legally bought or leased from them.

"We currently have alert committees made up of Malinké and Guéré so when there is a situation, we automatically meet and then we manage the situation. Currently the tension is under control."- Imam Mamadou Doumbia says.

This region was one of the hot spots of the 2010-2011 crisis born of the refusal of former President Laurent Gbagbo to acknowledge his electoral defeat at the hands of current President Alassane Ouattara. The main political actors of 2010 are still at the forefront this time. Alassane Ouattara and former president Henri Konan Bédié, now the leader of the opposition, are candidates, while the candidacies of Laurent Gbagbo and the former leader of the rebellion against him, Guillaume Soro (Ouattara's former ally and now opponent) have been invalidated.

Outtara is now running for a controversial third term.

Conflicts are permanent, but the electoral campaign has ignited passions, even if it means wringing their necks at the reality of the situation.

For the many of the inhabitants who reside in the cities of this region, their hopes are for a peaceful ending this time. 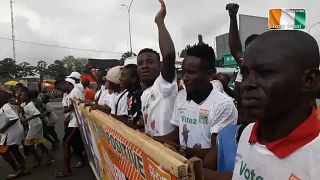