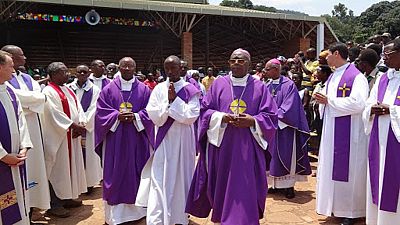 The Catholic Church in Burundi on Tuesday evening denounced “many irregularities” that affected the transparency and fairness of the May 20 general elections which saw the victory, contested by the opposition, of the candidate of the ruling party General Evariste Ndayishimiye.

“We deplore many irregularities with regard to the freedom and transparency of the electoral process as well as fairness in the treatment of certain candidates and voters,” said the President of the Burundi Conference of Catholic Bishops, Bishop Joachim Ntahondereye.

Bishop Ntahondereye, who was speaking in a sound recording transmitted Tuesday evening to AFP by the conference’s communication services, then drew up a long series of irregularities similar to those denounced by the party of opposition leader Agathon Rwasa, officially runner-up in the presidential election.

We deplore many irregularities with regard to the freedom and transparency of the electoral process as well as fairness in the treatment of certain candidates and voters.

The Catholic Church “deplores in particular the coercion exercised on certain proxies to sign in advance the counting of the contents of the ballot boxes, the stuffing of some ballot boxes, the voting in place of deceased and refugees, multiple and therefore invalid proxies, the fact that there were in some polling stations voters who voted more than once”.

It also condemns “the exclusion of proxies and observers from the places where the votes are counted, the intimidation and coercion of some voters by administrative officials who accompanied them to the polling booths, the intrusion of unauthorised persons into the counting stations”.

“In the face of these and other irregularities, we wonder whether they do not prejudice the (final) results to be proclaimed by the Constitutional Court on 4 June,” the Catholic Bishops’ Conference asked.

The Catholic Church succeeded in deploying 2,716 observers on polling day and “although their number was lower than the number of polling stations, they were able to arrive in all the municipalities where they were deployed in targeted polling stations,” said Bishop Joachim Ntahondereye in his statement.

The Catholic Church is the largest church in the country, with a population of about 11 million.

On Monday, the Burundian electoral commission declared the candidate of the ruling party Evariste Ndayishimiye the clear winner of the presidential election with 68.72% of the votes, far ahead of Agathon Rwasa (24.19%).

Mr. Rwasa’s party, the National Council for Liberty (CNL) denounced “an electoral masquerade” and announced its intention to lodge an appeal with the Constitutional Court on Wednesday or Thursday.

If the opposition’s appeal is rejected, Mr. Ndayishimiye will be sworn in in August for a seven-year term, renewable once, at the end of the outgoing president’s term.

In 2015, President Pierre Nkurunziza’s candidacy for a controversial third term had plunged the country into a major political crisis that left at least 1,200 people dead and some 400,000 Burundians fleeing the country. He had announced in 2018 that he would not be a candidate to succeed him.