Burundi sacks WHO officials ahead of May 20 polls 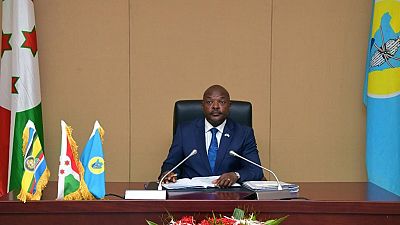 Burundi is kicking out the World Health Organization’s top official in the country just days before the presidential election and after the WHO raised concerns about crowded political rallies.

A foreign ministry letter seen by The Associated Press says the WHO representative to Burundi, Walter Kazadi Mulombo, has been declared persona non grata and must leave the East African nation by Friday. The letter says three WHO experts also must go.

The WHO Africa regional chief, Matshidiso Moeti, described Mulombo as an “extremely competent person” and said the WHO was communicating with Burundi “to clarify and understand the reasoning for the decision they have taken.”

The day that election campaigning in Burundi began late last month, images circulated online of crowded political rallies with President Pierre Nkurunziza in attendance. Moeti messaged the head of the Africa Centers for Disease Control and Prevention about it, the Africa CDC chief has said.

The Africa CDC chief, John Nkengasong, on Thursday called Burundi’s action “unfortunate” and said any differences should be addressed by dialogue instead of actions that affect the pandemic response,

“We don’t have the luxury of kicking out the WHO,” he told reporters. “This war has to be won in a coordinated fashion, and coordination is key. We’re in dire need of expertise. … We encourage countries to do the right thing .”

Burundi has 27 confirmed cases of the coronavirus, but some citizens and others have raised concerns that more exist. Authorities have been accused of downplaying the virus and relying on divine protection, while rights groups have alleged squalid conditions and lack of access to quarantine facilities.

Burundi is using virus restrictions to limit election observers, however, telling the East African regional bloc that any arriving foreigners would face a 14-day quarantine. The election is May 20.

Holding a vote that allows the virus to spread could make it “extremely difficult” for a country to contain it later, the Africa CDC chief said. “If an election is conducted that limits space for people to come together, it’s OK. But if you cannot ensure that … then it’s gonna put you in danger.”

Burundi’s previous election in 2015 sparked deadly political turmoil as Nkurunziza successfully ran for a third term that some said he had no right to pursue. This time he’s not running, but critics have accused the ruling party of targeting the leading opposition party and its supporters ahead of the vote.

Some fear further unrest if this election’s results are disputed over allegations of rigging. This is not the first time Burundi’s government has expelled a United Nations official. It kicked out the U.N. human rights office a year ago after the U.N. repeatedly raised concerns about killings and other alleged abuses following the 2015 vote.

Burundi also became the first country to leave the International Criminal Court after ICC judges authorized an investigation into allegations of state-sponsored crimes including murder, rape and torture.