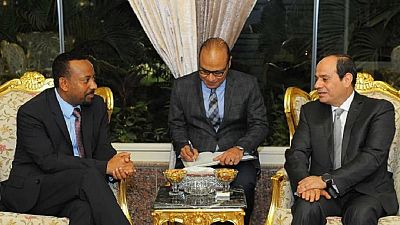 Egyptian President Abdul Fattah Al-Sisi says a dispute regarding the Nile waters should not lead any of the parties into making statements of high security implications.

“Our resources shouldn’t be wasted in conflict and wars which cost millions. Use that money for development of people and our countries instead,” he added whiles speaking to journalists in Sharm el-Sheikh.

His comments is in apparent reference to remarks made by Ethiopian Prime Minister Abiy Ahmed in October this year that no might was going to stop the country from building the Grand Ethiopian Renaissance Dam, GERD.

“Some say things about use of force (by Egypt). It should be underlined that no force could stop Ethiopia from building a dam,” PM Abiy said at the time “If there is a need to go to war, we could get millions readied. If some could fire a missile, others could use bombs. But that’s not in the best interest of all of us.”

Egypt’s government quickly reacted in a statement saying it was “shocked” by Abiy’s remarks and called it inappropriate to talk about military options.

Sudan is the third country impacted by what has become known as the Nile Dam dispute. The United States intervened in the issues with representatives of the three countries meeting president Trump and US treasury secretary in Washington in November.

Technical teams have also met recently in Cairo for talks. Ministers from the three countries are scheduled to meet next month in the US for the final round of talks to end the dispute.

The dam whose construction started in 2011 is expected to make Ethiopia a major power producer in the Horn of Africa region. But Egypt has expressed concerns over the filling of the dam because it depends 85% on the dam for its water needs.

Egypt bases its historical claims over the Nile on a 1929 agreement was signed with Great Britain, which at the time represented Uganda, Kenya, Tanganyika (now Tanzania) and Sudan.

The document gave Cairo the right to veto projects higher up the Nile that would affect its water share. This agreement has been challenged by the other countries that share the Nile Waters.

In 2010, the Nile Basin countries signed the Cooperative Framework Agreement (CFA), which granted all countries the right conduct projects along the river without Egypt’s prior consent. Egypt refuses to acknowledge this agreement.