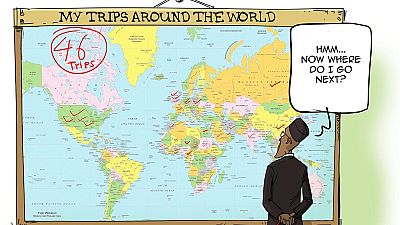 The septuagenarian joined his counterparts in Sochi last week for the Russia – Africa summit but he had barely spent two days on his return before the presidency announced that he was off to Saudi Arabia and then to the United Kingdom for a private visit.

His spokesman said the official trip to Kingdom of Saudi Arabia was to enable him attend Economic Forum of the Future Investment Initiative (FII) in Riyadh.

“At the end of the summit, President Buhari will on Saturday 2nd November, 2019, proceed to the United Kingdom on a private visit. He is expected to return to Nigeria on 17th November, 2019,” Garba Shehu further stated.

It means that Buhari was going to be absent for a total of 20 days. Five days in Saudi and 15 days in the London.

Most people commenting on the development bemoaned that the frequency of the travels aside, they were happening at a time that equally if not more pressing domestic issues needed Buhari’s attention.

In an editorial titled “Buhari, stay at your duty post,” the local Punch news portal accused the president of abandoning his duty post in preference for foreign visits of dubious value.

“It (the travels) provocatively gives the impression of an uncaring president. Without opening up the economy and ensuring sound rule of law at home, foreign travels to attract investment is a complete waste of public fund.

“Short of administering the country from outer space, Buhari has made international travel a pet project. In the first three years of his first tenure, he was outside the country a combined 404 days. That is one year and 39 days in 33 countries,” the paper computed as at April 2019.

But Nigerians are not alone in expressing concerns over presidential travels. A top Kenyan newspaper in its October 30 edition led with a banner headline, “Uhuru makes 31 foreign trips in 21 months.”

The Kenyan leader is also in Saudi for the summit in Riyadh, along with presidents of Congo Brazzaville and Burkina Faso.

If Jonathan Swift were alive, he would’ve probably dedicated his famous book, Gulliver’s Travels, to our President. Buhari needs to stay back and start delegating, there are issues that require his attention at home. You don’t have to honour every invitation like a messenger. https://t.co/t7UX0knJP4

Yes, Obasanjo also traveled, but his travels brought us DEBT RELIEF. What has General MBuhari’s travels brought us? Instead of RELIEF, Buhari increased our DEBT almost times 3, from ₦12 trillion in 2015 to ₦27.5 trillion today #TableShaker #FreeLeahShatibu #BuhariTormentor pic.twitter.com/UP0MJrG4GC

From South Africa, down to Russia, now in Saudi Arabia and later going to London.

The next level of travels.

Buhari is just a visiting president.

It is an eyesore, to see Buhari using our money to travel, gallivanting and living large around the world. Our sweats, our taxes, our future debts called loans, all because he carried the title of a “president”.

No one is bigger than the country; the citizens. It's a shame! https://t.co/fz0fKS1HUL

Buhari at home : he is useless and a figurehead, we are being ruled by cabals.

Buhari on trips: why is he flying around? Nigerians need their president to sit home and govern!?

May our lives not get tormented like the wailers'

this trip like the previous ones has proven to be very beneficial to our country.

According to the Bretton Wood institution, Nigeria is now ranked 131 globally on the Ease of Doing Business ranking, moving up by 15 places from its previous 2019 spot and also named..

Someone should hide Baba's international passport.aishambuhari ?

Official foreign trips by Mr President that will bring economic gains to our country or realistically help us in addressing our security challenges is not bad;but we should see Businessmen & security experts on the entourage.