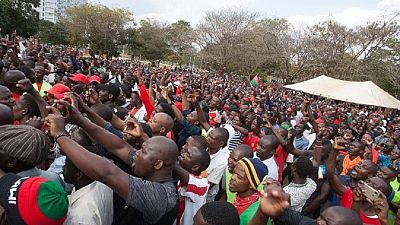 Six foreign ambassadors stationed in Malawi on Friday condemned “all forms of violence”, while demonstrations against the re-election of President Peter Mutharika in May regularly turn into clashes.

The ambassadors of the United Kingdom, Germany, Ireland, Japan, Norway, Norway and the United States called on the government, in a joint statement, to investigate “all criminal acts” and “accusations of misconduct by the security forces”.

A police officer was stoned to death on Tuesday near the capital Lilongwe during clashes between police forces and opposition demonstrators who were trying to prevent a public meeting of the president.

Two other people were also reported killed during demonstrations.

“It is particularly important that the various parties refrain from any use of violence or incitement to violence,” the ambassadors said.

At the head of the small southern African country since 2014, the incumbent president has been credited with 38.57% of the votes in front of his main opponent, Lazarus Chakwera (35.41% of the votes), according to official results.

The opposition has filed a request for the annulment of the election with the courts, which is expected to rule shortly.

His supporters are demanding the resignation of the Chairman of the Electoral Commission, Jane Ansah, accused of covering up the fraud. Their demonstrations have regularly escalated into clashes with the police.