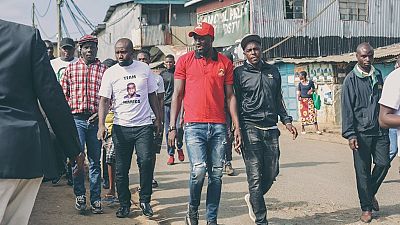 Kenya’s celebrated international football star McDonald Mariga has officially entered the race to win a parliamentary seat in Kibra, an area that is home to the largest slum in the capital city Nairobi.

The star is competing in the November by election following the death of the area’s member of parliament last month. Mariga was given a go ahead by the electoral commission after a case brought against him to bar him from contesting was squashed.

Jubilee party nominee MacDonald Mariga who was today cleared by the Dispute Resolution Committee to vie for the Kibra MNA by election has been issued with a nomination certificate by the Returning officer #byelections2019 pic.twitter.com/cdL9QdGTjP

The football star campaigning under the ruling party’s flag was officially endorsed by President Uhuru Kenyatta.

If Mariga wins, he becomes the fourth football star in Kenya to successfully join politicsthe toher three are Charles Mukora, Joab Omino and Chris Obure, who played for the national football team football team, Harambee Stars says Roy Gachuhi in his article for the Daily Nation

Polls say at least 47 percent of the voters in Kibra constinuency arestill undecided on the candidate that they will vote for reports The Standard However, it adds that the opposition party bearer Ben Okoth is leading at 27 percent while Mariga comes in second in popularity at 4 percent.