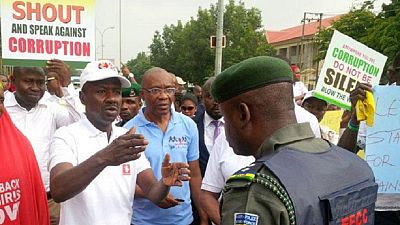 Oyediran Joseph’s arrest was disclosed by the EFFC’s zonal head in the central Kwara State regional capital, Ilorin. Sharu Isyaku, confirmed that the arrest was part of EFCC’s partnership with the FBI.

“Just last three weeks, the US authority had written to us for assistance in tracking and possible arrest and prosecution of two most wanted FBI suspects in Nigeria,” Isyaku said.

“The Commission acceded to their request. The Commission has been supportive of the activities of the FBI and every other foreign counterpart whose responsibility is similar or analogous to ours.”

The suspect was not part of 77 others who were listed in a recent FBI list of notorious internet scammers. The FBI last week listed suspects in what it said was one of the largest scams in US history.

Iyaku added that the suspect had illegally benefited about N60 million via Western Union Transfer, a local portal, The Cable reported.

EFCC said it continued its efforts at rooting out online scammers. The official also spoke about arrests and convictions that the outfit had secured in the last few months.

“Within seven months of our operation, the Ilorin zonal office has independently arrested over 58 suspected internet fraudsters, secured conviction of 25 and got forfeiture of their exotic cars and money running into millions of Naira,” he said.