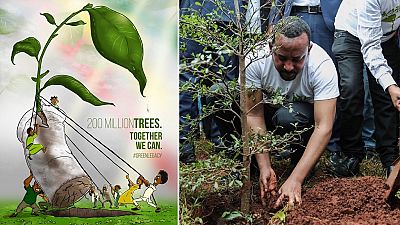 A campaign to plant 200 million young trees in a day has kicked off in Ethiopia under Prime Minister Abiy Ahmed’s wider plan to lead the planting of four billion saplings.

The July 29 campaign, under Aniy’s “Green Legacy Initiative” if achieved will be a world record according to the Guinness Book of World Records.

Office of the PM said over 100,000,000 young trees had been planted after a six-hour period, which means Ethiopia has already broken the 66 million record set in India.

The final figure of tree seedlings planted according to the Minister of Innovation and Technology came up to exactly 353 million, 633 thousand, 660 in a space of 12-hours.

The Minister said this was the verified of the final figure on the Number of Trees Planted according to the National Steering Committee. To make it onto the World Record, the figures need to be independently verified.

It is not yet clear if the Guinness World Records is monitoring Ethiopia’s the mass planting scheme but the prime minister’s office told The Associated Press that specially developed software is helping with the count.

The current one-day tree-planting record is held by India where 800,000 people planted over 50 million saplings three years ago.

In late May when the four billion plan was announced, the PM’s office said it was under the banner of the National Green Development program, meant to coincide with the onset of the rainy season.

Abiy kicked off his day in southern Ethiopia where he joined officials to plant seedlings in ArbaMinch. The campaign is part of the wider fight against environmental degradation.

Since May when the tree planting drive was launched, the Prime Minister made it a focal point of all his meetings and engagements around the country.

He planted seedlings with all guests that visited him at his office. He also planted special saplings in honour of slain officials of the June 22 assassinations in Amhara region and Addis Ababa.

Ethiopia has in recent years suffered from the negative impact of climate change especially in relation to droughts in parts of the country.

Reports indicate that in 2017, over 2 million animals died in Ethiopia due to drought because of the scarcity of rainfall.

Government officials and other private businesses have queued into the initiative. The capital Addis Ababa and other major towns were deserted as people took part in the campaign.

Staff and representatives from the UN family, African Union, Diplomatic Corps and Ethiopians from all walks of life gathered in Gullele Botanical Gardens and in a park in central Addis Ababa to play their part.

Additional trees were planted in the compound of the Economic Commission for Africa, which also houses other UN agencies.

According to Farm Africa, an organization involved in forest management in Ethiopia, less than 4% of the country’s land is now forested, a sharp decline from around 30% at the end of the 19th century.

Ethiopia’s rapidly growing population and the need for more farmlands, unsustainable forest use and climate change are often cited as the causes for rapid deforestation. 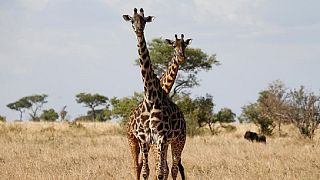 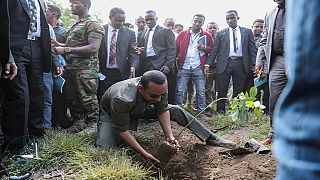 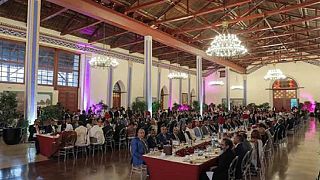