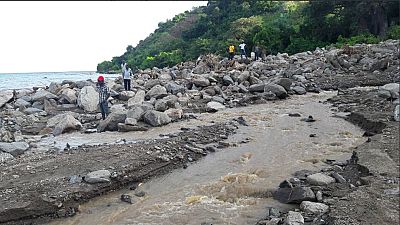 A landslide washed away an entire village in the Rumphi district of northern Malawi, killing at least three people, leaving five missing and dozens wounded in hospital, police said Sunday.

Rumphi police spokesman Tupeliwe Kabwilo told AFP that the incessant rains in the region had caused the disaster that devastated the village between the Mphompha hills and Lake Malawi in the early hours of Saturday morning.

The dead are two boys aged 12 and 15 and a 35-year-old woman, according to police. Among the missing are a one-year-old boy, two others aged six and ten, and two women aged 35 and 46.

Huge boulders rolled off the mountain and caused the greatest damage and if missing victims are buried under these rocks, then we will need an excavator to move them.

A Rumphi District Council official at the disaster site told AFP that the affected area was inaccessible by road and that it was impossible to organize a rescue operation.

“Huge boulders rolled off the mountain and caused the greatest damage and if missing victims are buried under these rocks, then we will need an excavator to move them,” said Wakisa Mtetetete, head of the city council.

“But there is no road access to the region, so it is an impossible task. The rocks are so large that they cannot be moved by hand,” says Mr. Mtetetete. He added that it was also possible that some of the missing persons were taken into the lake.

Alufeyo Mhango, a disaster management manager, told AFP that the authorities would have heavy excavation equipment transported through the lake as soon as the weather allowed.

“We have been informed by government departments that we should prepare to transport the equipment. But we will have to have a big boat and the hailstorm must stop or there could be more landslides,” he said.

According to Mr. Mhango, police, soldiers and emergency personnel are already on site.