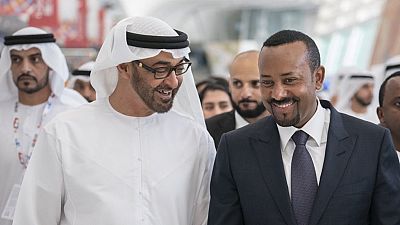 The Crown Prince disclosed that Abiy and his delegation arrived for talks aimed at enhancing bilateral ties whiles boosting a number of regional and international issues of mutual interest.

The trip is the first Abiy has undertaken to the UAE this year. Ethiopia – UAE relations have been on an upward trajectory over the course of 2018.

It was one of the Gulf nations Abiy visited last year as part of pooling regional support especially for economic reforms. The Crown Prince also visited Addis Ababa in 2018.

I was touched by the enthusiasm and joy of the athletes at the Special Olympics Abu Dhabi 2019. It’s exhilarating for me & my dear friend, the Ethiopian Prime Minister, to meet people of determination. We’re so proud of them and their families. pic.twitter.com/xEJGZ7NCeD

Abiy left Addis Ababa for a one-day visit to the Qatari capital Doha where he met Sheikh Tamim bin Hamad Al Thani, the Emir of Qatar, on bilateral issues of mutual interest.

He also met with high-level government officials. Abiy rounded up his mission with a visit to the Museum of Islamic Arts. The trip is also part of efforts to attract investments into Ethiopia.

Prime Minister Abiy Ahmed is currently on an official visit to the State of Qatar, where he will discuss with Sheikh Tamim bin Hamad Al Thani, the Emir of Qatar, on bilateral issues of mutual interest.#PMOEthiopia pic.twitter.com/hBhS96bkXI