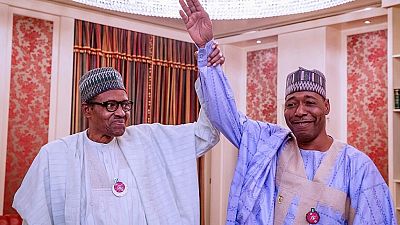 Governor-elect Babagana Umara Zulum also made history according to reports being the first professor to become governor across the Muslim-dominated north.

He replaces Kashim Shettima who had completed the two-term limit the law allows for a person to serve as governor of a state. Zulum run on the ticket of the ruling All Progressives Congress, APC.

The final results indicated that his election was by a landslide polling over a million votes against less than 100,000 by his main challenger.

He received massive support of outgoing Shettima and was also endorsed by President Muhammadu Buhari – both in Abuja and during his campaign stop in Borno ahead of February 16 polls that were postponed to 23rd.

Buhari beat main opponent Atiku Abubakar in the presidential polls streching Atiku by over three million votes. Atiku and the Peoples Democratic Party, PDP, have alleged fraud and have filed a poll challenge.

The APC also won Buhari’s home state of Katsina and Kaduna but is at risk of losing the ancient Kano State, where embattled governor Umar Ganduje is fighting for political survival.

Despite Buhari scoring wins in the other states as Adamawa, Sokoto and Zamfara, results show that there could be partial reruns after polls were declared ‘inconclusive.’

My gratitude and pledge to the people of Borno.

In the name of Allah, the most Gracious, the most Merciful.
We must begin with profound gratitude to the Almighty, the giver of power… https://t.co/yW84vIK4jv pic.twitter.com/pRAYi9FJdy