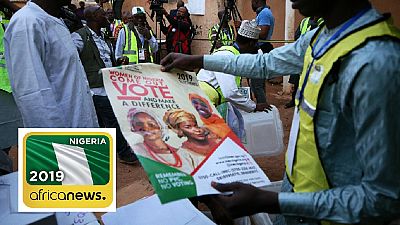 Elections in Nigeria are still underway though much attention had been given to the presidential ballots where president Muhammadu Buhari defeated his main rival Atiku Abubakar to secure reelection in February.

This weekend, elections for gubernatorial and state parliamentary positions will be held across the country. But there’s some thing different with some of the candidates contesting.

Tolu Olarenwaju, a young Nigerian entrepreneur is now taking advantage of this to fulfill his long dream of towing along his father’s legacy.

Tolu is a candidate for Ekiti state House of Assembly candidate told Africanews: “It is important to have bills like this being passed, and yearly for youths, this could reduce the rate of crime and jobless youths out there.

“… and also undergraduates still job hunting; so this is a good opportunity. For me, there is a lot of empowerment to be done at the rural levels and grassroots.”

Another such aspirant is Babajide Balogun. He is contesting for a seat in the Lagos state house of assembly under his Ifako Ijaiye constituency. He has been sharing some of his plans.

He is running on the ticket of the main opposition Peoples Democratic Party, PDP for the state legislative post: “I am going to go there to initiate bills whereby I will include youths.

“There are a lot of unemployed youths out there roaming around the street and there are young people out of schools roaming around and hawking for their parents so that they can survive. There are ways we can bring these people back into school and train them”.

The youth constitute around 65 percent of Nigeria’s population. Though there’s optimism with the law enabling young persons to run for office, money is, however, still a huge factor in Nigerian politics.

Boniface Aniebonam, chairman of the New Nigeria Peoples Party also added his voice to the issue: “The idea as far as i am concerned is to create a political space for the young ones to grow the ladder.

“But if you are a young man that doesn’t have the financial capacity how would you do this? Except you have a godfather that would push you, and this also means that when you get to power you would wont be allowed to do what you want to do. So, these are the issues,” Boniface added.

Some of the electorate voting in Nigeria’s general elections this year are those who have only known democracy all their lives since the country returned to civilian rule in 1999.

For them it is time for a generational shift to young leaders that can identify with and tackle the issues confronting them.