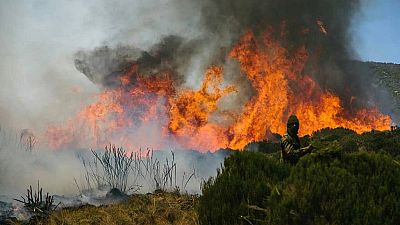 <p>Mount Kenya Trust, <span class="caps">MKT</span>, has launched an appeal for funds to help arrest spreading fires on the slopes of the famed Mount Kenya.</p> <p>The trust, an organization dedicated to helping preserve and protect Mount Kenya on Wednesday started a fund raiser within and outside of Kenya seeking help douse the raging fires. </p> <p>The fires, it said, had been raging for the past five days and efforts to quell them was getting out of hand hence the need to seek funding to curtail a looming danger.</p> <h2 style="font-size:16px;"> What <span class="caps">MKT</span> said of the crisis: </h2> <p>“Throughout the past five days, winds and extremely dry conditions have burnt hectares of moorlands and the fire is dangerously close to the forest. In some areas the forest is starting to catch – along with the bamboo regions. </p> <p>“We are struggling to regain control. We are working with the Kenyan government and local partners around the clock, but resources and funding for the scale of the problem are scarce.”</p> <h2 style="font-size:16px;"> The fund rasing avenues: </h2> <p>They announced local money transfer lines through which people could donate as well as their bank details. As at Wednesday evening, its crowdfunding appeal dubbed ‘Mount Kenya Fires had raised about £2,200 out of a target of £15,000. </p> <p>The flexible nature of the funding module means they receive donations as and when they are made. Persons in organizations in the United States are also urged to donate via a fellow conservation outfit, the Tusk Fund. </p> <p>“Mount Kenya is burning and we urgently need funds to put out the fires raging on the northeastern slopes,” the appeal page read. </p> <p><img src="https://static.euronews.com/articles/68/80/688005/1024x576_bonus-MKTr.jpg" alt="" /></p> <h2 style="font-size:16px;">What the money will go into: </h2> <ul> <li>Funding of helicopters – to drop people and douse the affected areas with water</li> <li>Planes for surveillance high up on the mountain</li> <li>Cover costs such as fuel, ration and other equipments</li> </ul> <p>An hour running a helicopter, <span class="caps">MKT</span>, noted costs $2,000. Organizations that continue to partner with them include the government of Kenya and other local collaborators.</p> <p>“Hours and hours have been donated so far by our partners Tropic Air, the David Sheldrick Wildlife Trust and <span class="caps">KFS</span>,” they added in a statement. </p> <h2 style="font-size:16px;"> About Mount Kenya </h2> <p>Mount Kenya is the highest mountain in the East African country but overall, Africa’s second-highest behind Kilimanjaro. Mount Kenya is the source of the name of the Republic of Kenya. </p> <p>The highest peaks of the mountain are Batian (5,199 metres (17,057 ft)), Nelion (5,188 metres (17,021 ft)) and Point Lenana (4,985 metres (16,355 ft)). </p> <p>It is located in eastern and central Kenya specifically in the Meru, Embu, Laikipia, Kirinyaga, Nyeri and Isiolo counties, about 16.5 kilometres (10.3 mi) south of the equator, around 150 kilometres (93 mi) north-northeast of the capital Nairobi.</p>