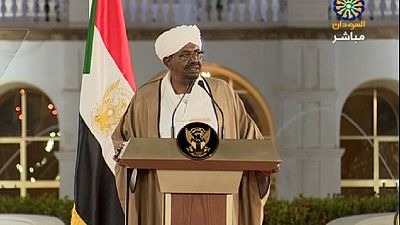 Sudan’s embattled president Omar al-Bashir on Friday declared a state of emergency, as he sought to quell anti-government protests that have lasted over three months.

The demonstrations, which started on Dec. 19, were triggered by price increases and cash shortages but quickly developed into protests against Bashir’s rule.

In a televised speech, Bashir announced a raft of measures including;

“I announce imposing a state of emergency across the country for one year,” Bashir told the nation.

“I announce dissolving the government at the federal level and at the provincial levels,” he added.

Ahead of Bashir’s speech, security forces fired tear gas to disperse at least 200 of protesters in Khartoum, eyewitnesses said.

Bashir, an Islamist and former army officer, came to power in 1989 after a military coup. He won elections in 2010 and 2015 after changes in the constitution following a peace agreement with southern rebels, who then seceded to form South Sudan.

ALSO READ: What next for Sudan after stalemate between resilient protesters, defiant Bashir?

Several users on social media posted pictures and videos of what they described as protesters defying the declaration of the state of emergency and demonstrating against Bashir’s speech.